I have been a fan of FEW Spirits for a while, and I am always happy to revisit them after some time apart! I usually go for their Rye whiskey because it makes for a fantastic old fashioned! I am a huge fan of such smaller craft distilleries where their passion for the product shines through in all they do. You can usually tell the difference between just pushing a product and where there is actual passion. At FEW spirits, there is the passion, which will always be reason for me to try something.

FEW is located in  the Northern Chicago Suburb Of Evanston, Illinois. An interesting aspect of Evanston’s history is that the town played a part in the introducttion of prohibition across America, and was a stronghold of the temperance movement. Even after prohibition was all said and done, Evanston remained a dry community that held on to that concept for decades, until 1972.

Such history was the inspiration that fueled the FEW brand! The founders thought, why not create this bold new whiskey brand in a back alley, in the area that was a seat of prohibition! They set off to craft a whiskey that not only honoured Kentucky counterp

arts, but also had an exciting Chicago flare! They pride themselves on creating true grain-to-glass spirits that push those innovative boundaries!

We currently have their bourbon and rye, but hope to bring in some more FEW bottlings. I want to try every single one they produce! Hopefully when the world starts getting back to a less chaotic place, a trip to Chicago will be in the books!

The straight rye whiskey is what I’ll be enjoying tonight in one of their own FEW Bold Fashioned whiskey cocktail. 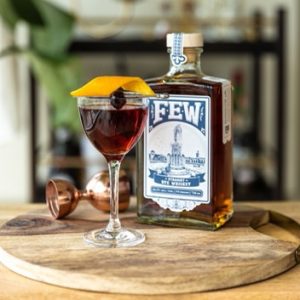 MUDDLE THE SUGAR, BITTERS AND ONE SPOON OF WATER.   ADD FEW BOURBON AND ICE.  STIR UNTIL SUGAR DISSOLVES.  ADD A SMOKED CHERRY AND SMOKED ORANGE FOR A BOLD FINISHING TOUCH.

Join me and enjoy a FEW yourself.