Yesterday, Rob and friends from Boston popped into the office for a few drams of our cigars malt which seemed to go down very well 🙂 and sampled the new Cohiba Behike 52 followed by the heavier bodied UK regional Punch Serie D’Oro no.1. Fairly certain that we were all in agreement that the scotch worked very well with the cigars 🙂

Our Cain launch event on the 14th June  is now well and truly sold out – we expect the cigars to sell out pretty fast too. You can pre order them now on this link

I’m off to New York to herf with friends for the next week and promote the fabulous range of Oliva cigars as non-Cubans go we really rate these cigars. 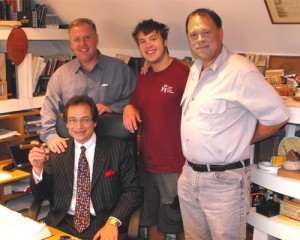 Good grief is it really Friday already? Michelle and Laura were both on vacation so I have been pulling double shifts on what has to be the busiest week of the year so far!

La Gloria Cubana Deliciosos are now available in singles and jars of 25. Small quantity so order early to avoid disappointment. They should be online on the next 24 hours or if you can’t wait you can email me on sales@cgarsltd.co.uk to reserve. The LGC is a Hermosos no.4 sized cigar i.e. 5” length and 48 ring gauge with a super sweet flavour characteristic. Highly recommended

Our Vintage Cigar Auction has been getting a ton of media attention all over the world and we are looking forward to the evening on the 21st June.  Here’s a link if you wish to register as a bidder and attend the auction at Boisdale Belgravia. If you wish to browse the lots  and bid online click here. Finally the 171 Lot colour catalogue will be out next week and if you want a copy drop me a line sales@cgarsltd.co.uk

We are organizing an exclusive launch part for Cain Cigars at Dunhill on the 14th June- very few tickets remain available for this first tasting in the UK of Cain cigars matched up with some Champagne, Scotch and canapes from 6.30-8.30 pm. Email for further details 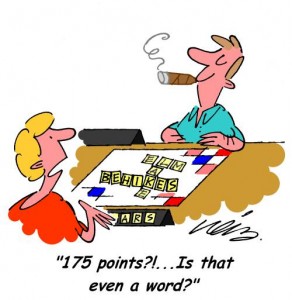 Oh what a night 🙂 The Hunters and Frankau launch party at the Goring hotel attended by over 150 cigar aficionados last night.

A slick H&F event with copious amounts of Krug champagne,chocolates made by Damian Allsop and of course loads of Havanas 🙂

The evening started with the UK exclusive regional edition El Rey del Mundo Choix de L’Epoque and continued with the new Cohiba BHK 52 which was part of a gift box containing another one of each of the 3 sizes of Behikes.

Thankfully the weather wasn’t too bad and the rain stayed away so we could enjoy our cigars with a little background music from a Cuban band who were excellent whilst the cigar roller was rolling some fresh Havanas.

I love these events as its a great opportunity to meet up with some of the top Havana Cigars Specialists including Edward and Eddie from Davidoff, Lawrence and Johnny from Sautter ( and Dessie was at the part too- always lovely to see him) Ajay from La Casa del Habano London and many others.

If you were one of the 30 or so chaps that booked early through C.Gars Ltd – your ticket price included 2 additional Behikes and your goodie pack is now on the way to you so you will hopefully be enjoying it over the weekend 🙂

On to Boisdale in Belgravia for dinner and smokes with friends after the party….and a BHK 56 which I can confirm is ‘the bomb’

A BIG thanks to Hunters and Frankau – truly a class act 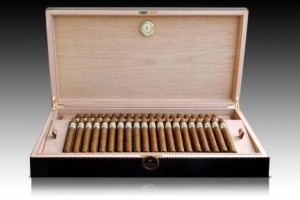 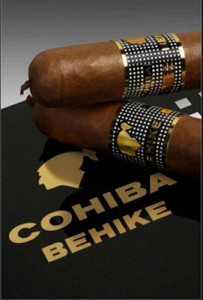 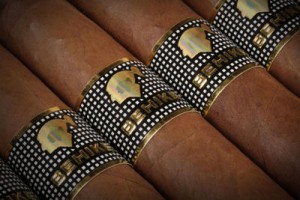 Last week was another busy one with a visit to have a dram or two on Wednesday with my ‘ twin’ Ranald Macdonald of Boisdale. Why is he my twin? Well we have the same birthday and we both love Havana cigars and single malt Whiskey – of course we are not quite identical twins and I am much younger 🙂 Nice to bump into journalist James Leavey as well and smoke a couple of Monte 2’s with him.

Thursday I was back at Boisdale Belgravia for lunch with Jemma Freeman from Hunters and Frankau. We enjoyed some excellent Punch Serie D’Oro no.1 (UK regional edition and one of my favourite Havanas) It was great to catch up with Jemma and learn more about all the exciting and exclusive new releases planed for the UK market exclusively over the next couple of years – and they are VERY exciting 🙂

This week we have the long awaited Cohiba Behikes launch at the Goring hotel where 150 cigar aficionados will be enjoying the 3 new Cohiba ‘BHK’ cigars with some suitable first class libations. Guess where I’ll be going for dinner after the launch? – Boisdale where else !- and maybe over to the Lanesboro for a late night smoke and nightcap.

Our vintage cigar Auction catalogue should be more or less complete by mid week and online for clients to start bidding on. Hard copy catalogues will be available by the end of this month. Around 150 Lots of various brands, vintage and size will be available, some with incredibly low estimates so some bargains may well be had – just like the last auction.  Happy days 🙂 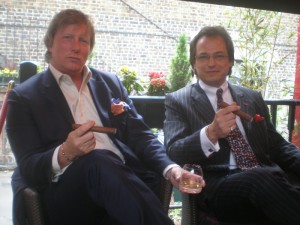 We are clearing out a friends collection and are inviting reasonable offers on the remaining cigars that are available.

Offers will be considered on a first come first served basis so try it!

Make an offer- worst is we say no but you may just bag a bargain.

Prices include intact shipping. Email me on sales@cgarsltd.co.uk to make your offer.

Intact shipping – order today – delivery Thursday. ( sorry not available to our clients in the UK)

Order over email please sales@cgarsltd.co.uk or use this dummy secure order link

The latest line of Cohiba – the Behikes aka ‘ BHK’
A limited annual production so when they are gone – that’s it for the year.

I think that makes them a candidate for laying down, maturing and collecting and many of my clients are already making 10 year plans for laying down a quantity of BHK’s annually.

The BHK’s have a different blend to the 40th anniversary Behikes (aged 5 years) as well as an extra Medio tiempo filler leaf which will give the cigar a very distinct flavour characteristic as this is a dark leaf from the top of the plant.

These splendid Havanas are presented in boxes of 10.

We have also made a sampler pack available.

Place orders early using links above or email us at sales@cgarsltd.co.uk

We are still working hard on our June 21st Vintage Cigar Auction and hope to have the online catalogue up in the next week if all goes to plan ( rarely!)