It’s been one of those weeks… busier than busy :-)I arrived back from Havana on Monday having herfed around 6 robustos and piramides a day for the previous 5 days and thought, maybe I’ll give it a break for a while. Strangely, that “while” only lasted till after lunch when “Rum ‘o’ Clock arrived and of course a cigar had to accompany a tumbler of HC15 (one ice cube only – thank you). Suitably revived I had around 500 emails to catch up on which is not bad considering we receive an average of 1200 emails a day. Thank goodness for wifi in Havanas Nacional Hotel

I am grateful to those awfully nice chaps at HSBC for inviting me to a splendid evening at One Whitehall Place on Tuesday. Dinner was very good indeed, the architecture of the room was incredibly impressive and the guest speaker was Tim Waterstone of Waterstones Book store and Daisy & Tom fame. Tims talk was truly inspirational and it was a pleasure to be on the same table with him.

Sadly no smoking at the dinner but I managed a Ramon belicosos on the drive home 🙂
Thursday evening I attended a cigar auction held by my friend Adrian Lesley of Cigars Unlimited. Adrian has a lovely cigar store in Fulham that is highly recommended (and his Mojitos are pretty good too! thank you Adrian). The auction included some exceptionally rare Dunhill and Davidoff cigars from a private collection. C.Gars Ltd were successful in purchasing around 35 of the available 60 Lots. Simon Chase of Hunters and Frankau did an excellent job as auctioneer and the auction was well attended with prices in line with expectation if a tad low.
Have to run, off to the vet for a follow up with Cohiba the cat who has finally been cured of his smoking allergy thank goodness. Now if I can just wean him off the rum….

Have a great weekend
Peaceful puffing
Mitchell
Great news from our Chancellor….2.5% reduction in VAT ! Don’t spend it too fast though,well at least not on your cigars as he has very kindly immediately increased duty on tobacco by 4% !
Just in case you needed further proof that Darling is the most out of touch Chancellor in recent memory.
Oh well his days are numbered in government no doubt and I am sure cigar smokers will be pleased to see the back of the silly named and silly eyebrowed Darling ! 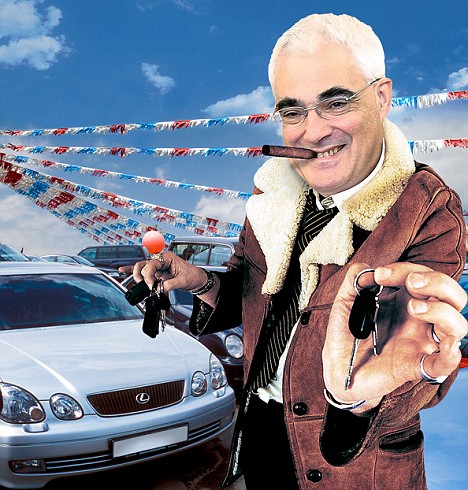 A good friend of mine suggested that Darling may be a long lost Marx brother ! I think Harpo,Groucho,Chico,Gummo or Zeppo would do a better job as chancellor….and they’re dead !

Well …C.Gars Ltd will hold prices as they are for as long as possible to bring our customers the best value cigars in the UK
Peaceful puffing
Mitchell

Mitch is on his flight home from cigar land 🙂 and I thought you may like to see some of the fantastic photos from his trip to the Island …..

One of the beautiful auction lots that I was unsuccessful in bidding on!

Wake up Massimo you still have to do the auction!

Don Roberto (!) and the lovely Tamara from Partagas

Kiki from Partagas with a few smokes:-)

No idea who that is, geat photo looks like the lady has set the bloke in the middle on fire!

The Partagas cake…almost as tasty as the cigars!

Minetti stealing all the good cigars!

Just about to leave sunny Havana, after a weeks non stop herfing:-)
Had some great news from Laura that our website is now visited by over 1500 people daily and my blog is one of the most popular pages visited! Laura tells me we just topped 15000 clients world wide, Michelle advises 100% same day order shipping/fulfilment over the last week whilst I have been away…woohooo:-) C.Gars Ltd has come a long way since 1997. Well done Laura, Mishie, Eli, Marci, Christine, Michelle and all of the C.Gars & Turmeaus team.
The trip has been my easiest yet as the exec floor at the Nacional now has fairly high speed wifi. Some improvement from the days when there was no internet and in fact no mobile phone network (not that long ago!)
So now I’m looking forward to the 2009 Festival which will be the last week of February. If you’d like to go to Havana, drop me a line and I’ll hook you up with Mike Mirecki from Cuba Welcome Travel. Best value for travel to Cuba….and Mike is “one of the boys”:-)

Can’t wait to get back to London as I’m waiting for official news from Hunters and Frankau about the launch timing of the fabulous new UK regional edition cigars ( La Gloria Gloriosos and Punch Serie D’Oro No.1)
…just time for a final Cohiba robusto at Jose Marti airport…. yes smoking IS allowed 🙂
Saludos
Mitchell
Just back from the fantastic gala dinner which was held at the Habana Libre Hotel where some 300 “Amigos de Partagas” enjoyed an incredible evening of good food, wine, Havana Club rum, great music, incredible cigars and of course the best of company.
Specially banded cigars were handed out throughout the evening including an excellent Laguito no.1 and the incredible new Salamones.
Massimo held the auction of 5 special humidors containing a variety of specially banded cigars. The final lot sold for 10,000 C.U.C to Roberto from Italy. The auction was a great success and the money raised is donated to a Cuban charity.
It was a pleasure to be amongst so many fellow cigar smokers and friends from all over the world including Italy, France, USA, Canada and Greece to name just a few, although I was surprised that the English contingent amounted to …3 (Me, Zaff and Wilkes!) 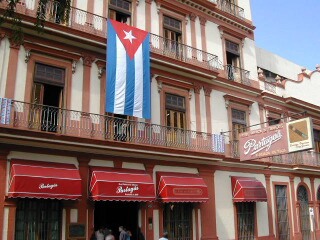 Proudly representing C.Gars Ltd and La Casa del Habano-Hamburg, I was invited on to the stage to be recognised as a “Friend of Partagas” and presented with a beautiful box of specially banded cigars. The box has also been signed by the team working at Partagas LCDH including “La China” one of my favourite rollers.
Towards the end of the evening, a raffle was drawn. Their were a variety of prizes including a holiday for two in Sardinia kindly donated by an Italian aficionado and it was great to see one of the guys on our table win the prize.
Finally the most enormous cake was wheeled in and it was made to look like the Partagas factory.
Thanks to LCDH Partagas and the Italian cigar clubs for putting together such a wonderful evening
Photos to follow in the next few days
Have a great weekend
Saludos
Mitchell