Consider the family history of Lorenzetti and you will also glimpse Italy at the beginning of the twentieth century.

The founding father of this historic name, Otello Lorenzetti, was born in 1911 in Castelnuovo, Recanati. He was not only an entrepreneur but also a creative man with many passions.

Like many other natives, he was from a big family. In his case, he was the fifth child. The family-owned a tavern where he started to work from the age of seven. He wo

uld go to nearby St. Agostino and purchase fizzy drinks to resell at the bar.

His story is not uncommon for Italians of the same generation. He could not finish his studies and had to start working when he was a child.  He did at least have the chance to develop his passion for singing and attended the School of Singing “Cantorum” at 12. He maintained this love of music for the rest of his life.

Lorenzetti’s first formal job was at a pipe manufacture in Recanati. Here he began to develop the notion of establishing his own pipe company. At 18, this dream went on hold as there was compulsory military service in Cividale for those of his age, with Lorenzetti leaving Italy for service in Africa. He returned in 1937.

That year, he founded his pipe company called “Otello Lorenzetti“. He was able to produce around 20 to 30 pipes a day, a remarkable number considering the only tools he had were rented from local craftsmen. Like many businesses in their early stages, Lorenzetti was both the founder and maker, as well as chief salesperson. He would spend mornings on his bicycle going shop by shop in the surrou 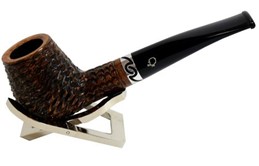 nding cities to sell his pipes and then back to work in the afternoon. In the evening and late into the night he would make his new set of pipes. It was a lot of work, but he was fuelled by his passion and love for the craft. So, if you like, a labour of love.

The year of 1940 was, like three years earlier, a key 12 months for Otello. Foremost, he married Marinella, who was not only the love of his life but an important business collaborator. He luckily escaped harm in the Second  World War in which he served from 1940.

After the war, in 1947  Otello built pipe-making machines with a view to expanding production and range. He also bought a “Vespa” (could anything be more Italian?). Thanks to his new acquisition, he managed  to grow the business further with some direct marketing on wheels, horsepowered

International acclaim followed in the Sixties and Seventies. Lorenzetti pipes during these decades mark the years in which the brand became international, proving popular across Europe, America, and Africa.  At this point, the whole family became involved in the business. By the Eighties, Lorenzetti had become a well-known brand, cherished by many, and the founding father’s creations were part of many famous pipe collections, including that of Sandro Pertini, who served as president of Italy.

Since this golden age, Lorenzetti has become a brand of the most selectively minded that offers high-quality pipes with impeccable designs. If you want a chance to own a part of Italy’s history, check out our selection on the Cgars website, and you will surely find a new companion and loyal amino.

Until next time, or as the Italians say, la prosima volta.

I am so happy to have received our shipment of this limited-release Ardbeg. A bottling born during what was a global lockdown, this is definitely one for the history books. Leave it to Ardbeg to create something so delicious in the midst of such an uncertain time.

The third batch of this extremely rare 19-year-old is inspired by the “Singing Sands” of Islay, Traigh Bhan beach. When the wind blows there, the sand is whipped around creating a sound that is almost like voices.

To make the whisky, casks – American oak and Oloroso sherry – taken from the deep, dark corners of Ardbeg’s warehouse are brought into the light of day. Then the whisky is matured in these casks which creates a wonderful balance. Changes are subtle from batch to batch. Overall, in this incarnation, you will be getting, on the whole, a spicier dram (which certainly suits me!).

As the distillery maintains: “In Ardbeg Traigh Bhan Batch 3, faint waves of scented woodsmoke mingle with sea spray and pine resin. Decidedly more spicy than previous batches, wisps of aniseed toffee and cayenne pepper follow on the breeze, while citrus laps over notes of 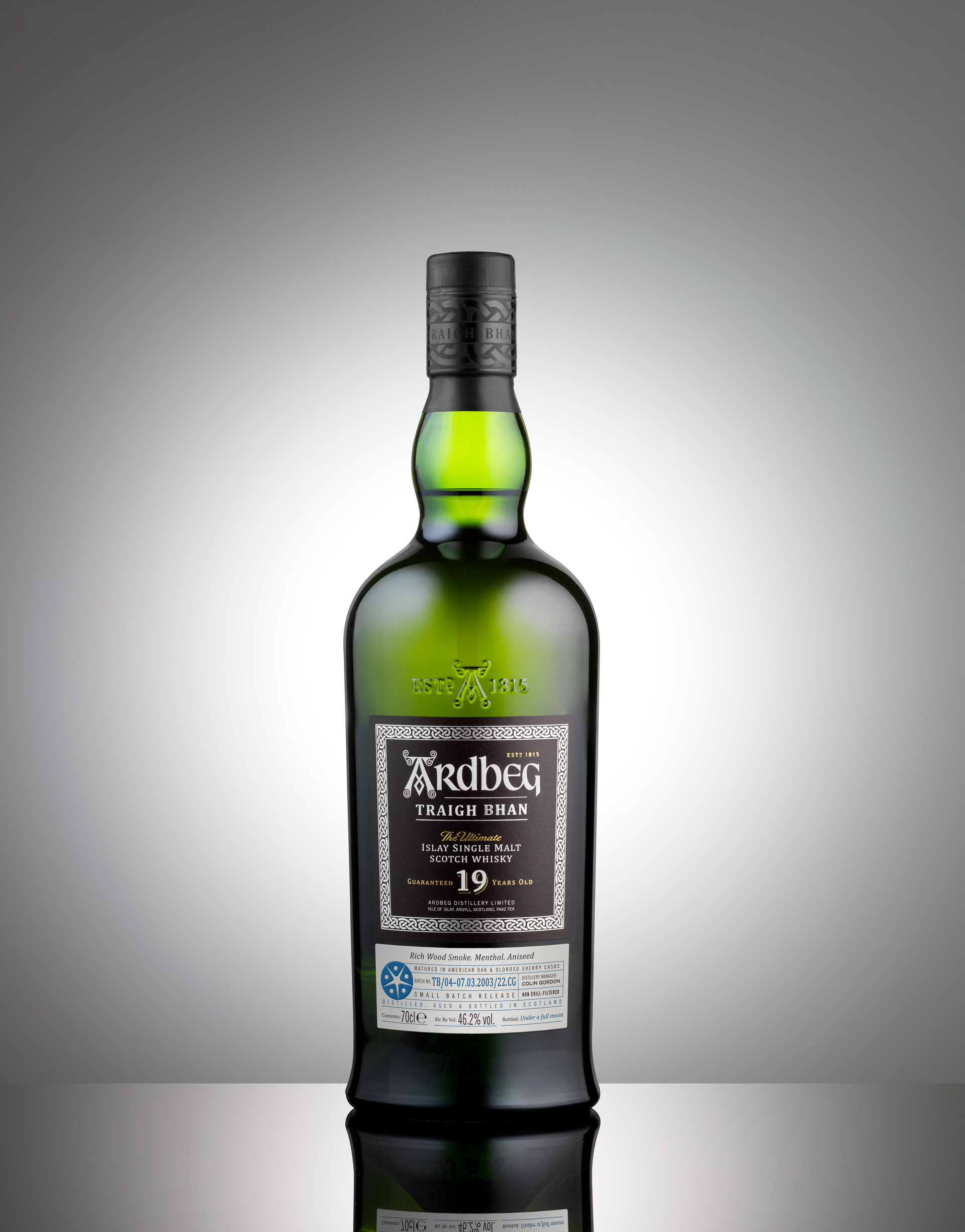 fresh lilies. With a splash of water, waxy notes and charcoal flow into droplets of classic Sherry and linseed oil. A rush of rich, sappy textures is followed moments later by classic, sweet smokiness. Tarry rope and treacle toffee plunge the palate into the second wave of soot and aniseed twists. Smoke bobs on the horizon, while smoked brown sugar, walnuts, and spices gently dissolve away. A long, unhurried finish carries bitter almonds and clove in its wake, before slowly drifting away.”

The great whisky sage, Dr. Bill Lumsden, adds: “Batch 3 is an extraordinary dram. Different from its predecessor in far more than just taste, this 19-year-old is a first for Ardbeg and a collector’s dream.”

For all the fancy packaging that can accompany an Ardbeg release, you can rest assured that the liquid accompanying the pretty wrapping is top-notch. Like almost every limited edition from Ardbeg, the collectors are sure to snap up quickly what is available. So grab this, and other fantastic Ardbeg releases, on our site. You’ll be able to find some rare options if you look now.

We thought we would do something a little different with this week’s cocktail. So, what’s better than just a great cocktail? Answer; an equally delicious meal to accompany that cocktail! The recipe I have for you here comes from the fine folks at Bulleit Bourbon, and it seems that they also have great chefs on hand! I made this the other night and it was so delicious. For me, the chicken caught my eye. Moreover, you don’t need to follow the recipe, line for line. 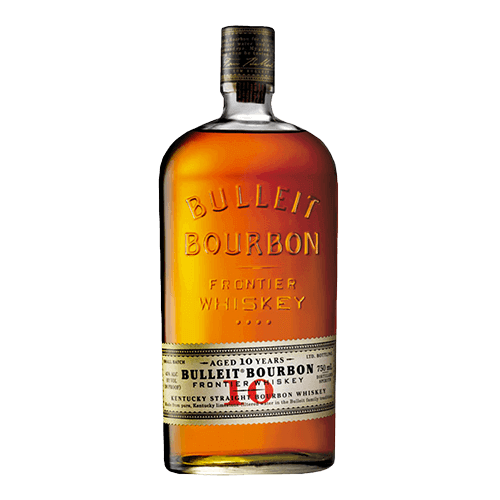 Combine all ingredients in a blender and then blend at a high setting.

Now for that meal. 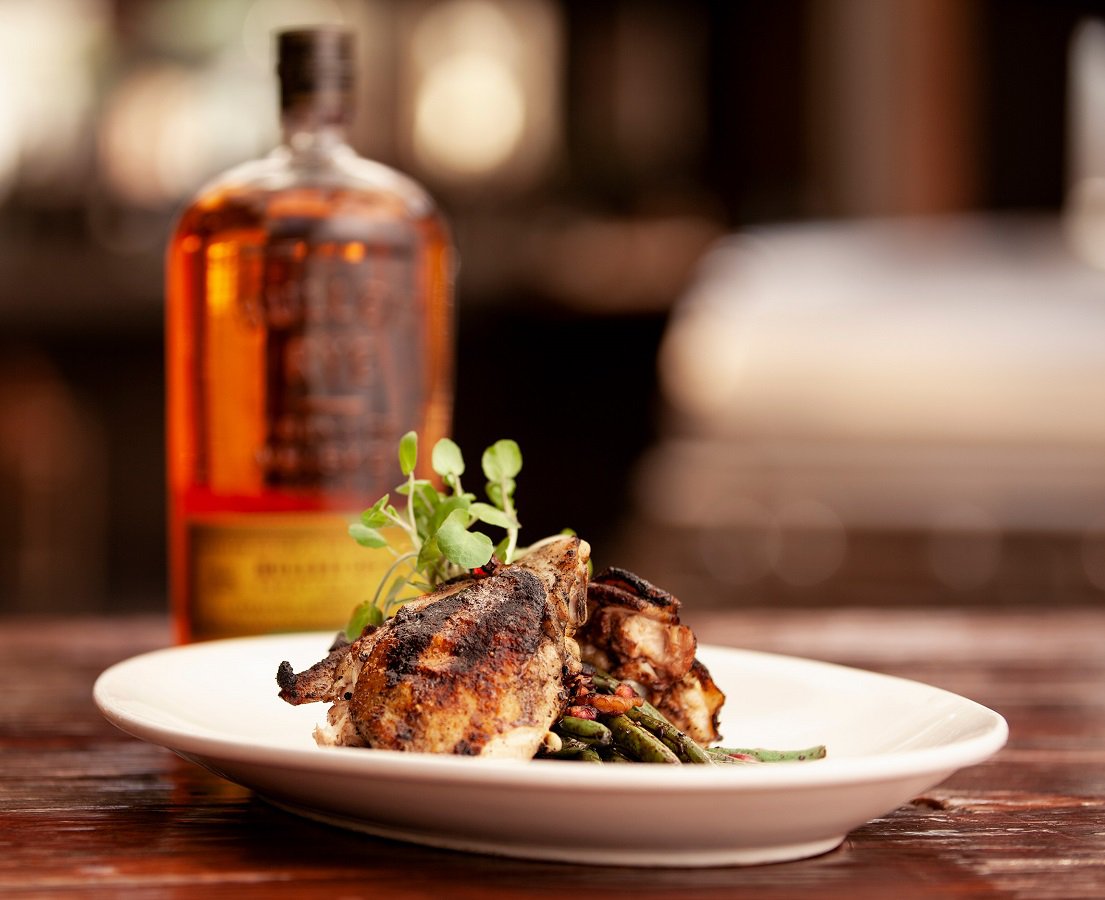