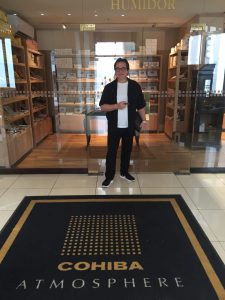 Just back from the annual Partagas festival in sunny Havana 🙂 I reckon this is the 19th (out of 20) that I have attended and this was in fact probably the one I enjoyed the most.

For a kick off, the weather was perfect in Havana. Hot and sunny days and warm evenings, perfect for herfing! We stayed in the new Manzana (Kempinski) Hotel which is so dramatically better than any other hotel I have stayed in over the last 20 years of visiting Cuba, I was quite amazed. Truly a 5 star hotel with service to match.

The roof top pool area had stunning views and were all set up for herfing too. I 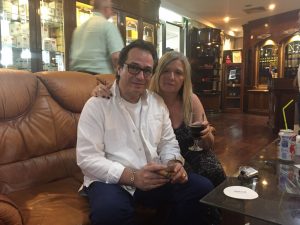 Zooming around all the usual cigar shops and lounges I can tell you that there was little of interest in terms of interesting cigars. No BHK’s or Siglo VI’s. Talisman and Romeo Gran Reserva are not available yet. No doubt this is due to the ongoing shortage of wrapper leaf. I understand that the agricultural problems may now be resolved but it may well take some years to filter the interesting product back into the market. 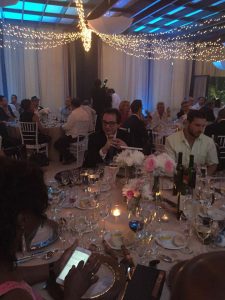 The gala dinner was the largest Partagas event I can remember with some 350 guests. This Festival differs from the Feb/March Festival as it’s really for aficionados and not trade so it has a different vibe completely. A lot of the crowd have come to the Festival for many years so it’s good to meet up with old friends as well as make new friends.

The event was held at El Laguito and unlike the Feb/March Festival the music volume was actually quite perfect so you could enjoy the fabulous band and still have a conversation with the people on your table. 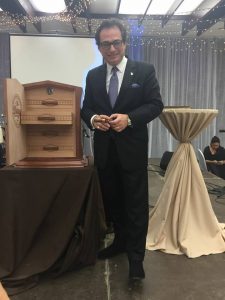 A charity auction was held as usual with 5 Lots of magnificent one off humidors containing specially banded cigars, with proceeds going to the Cuban National Health Service.

We had some excellent Puro Uno Argentinian wines (TY FB) and 25 year old rum as well as 5 cigars handed out during the evening and another 5 cigars in a goodie bag to take home. Not bad value for 250 cookies 🙂 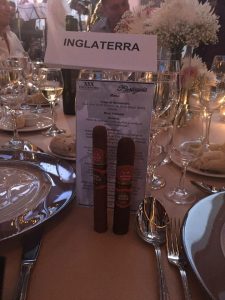 Back to grey and rainy London now and another tax increase from the chancellors budget today sadly although thankfully he left booze alone.

I’m just proof reading the vintage Cigar Auction catalogue and Lots will be online and bidding open 10 days before the sale. A magnificent catalogue with some of the rarest and most desirable Havanas known of. 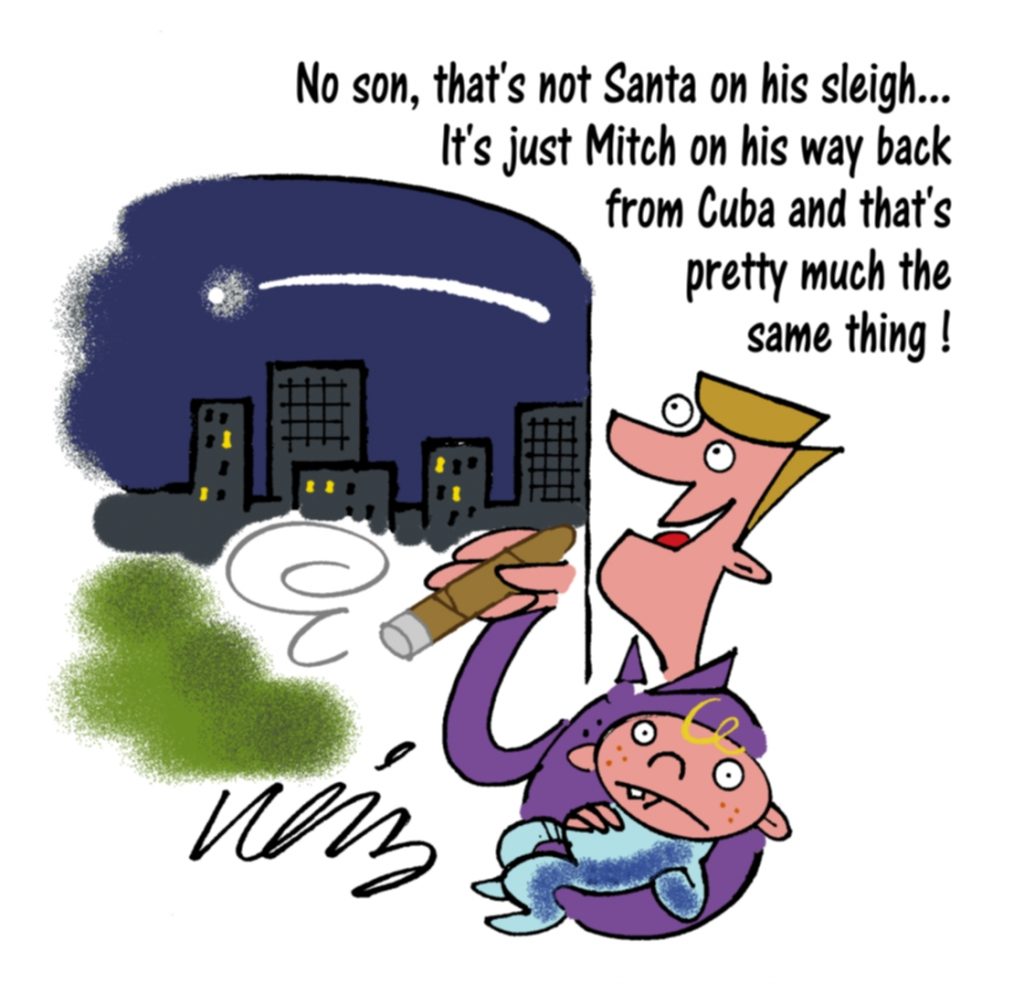 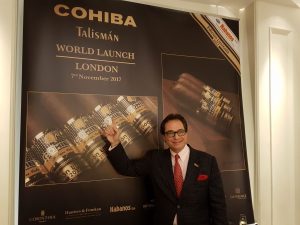 Finally Cohiba Talisman Limited Edition 2017 came in… and went out! In fact our fastest selling cigar in history. The interest in this cigar was truly staggering and despite a rather reasonable allocation it wasn’t nearly enough to cope with the demand.

The launch party at the Corinthia hotel  on the 7th November was truly one of the best cigar events I have ever been top. Hunters & Frankau certainly know how to throw a bash. Our goodie bags contained a beautiful single boxed Talisman as well as another Talisman, 1966 and Medio Siglo. 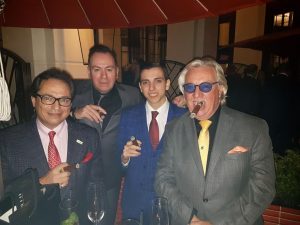 My colleagues Ron, Michelle, Calum and David also attended this extraordinary event and thoroughly enjoyed it despite a rather wet November evening! Canapes, chocolates, cocktails and champagne, music and brilliant speeches made this a night to remember.

There was an incredible display of vintage Cohiba including 30th, 40th and 50th anniversary and also a Cubatabaco 1492 humidor… mouth-watering!

Leopoldo Cintra the VP of Habanos S.A confirmed that this was the exclusive world launch of the Talisman and anyone who thinks they have smoked one before has indeed smoked a counterfeit. 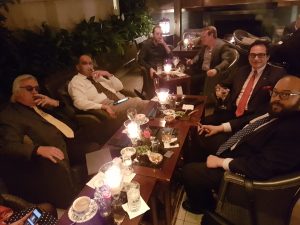 The post launch herf was in the Garden Room at The Lanesborough with friends. We herfed our way through all of the Talismans and 1966 from the launch paired up with some first rate Montrachet.

“So what are the cigars really like”, I hear you thinking?

Well, it does remind me somewhat of Robustos Supremo though the flavours are a touch more delicate. For sure a little extra age will benefit this cigar but the construction was excellent, the appearance perfect and the blend well balanced. All considered this is likely to become highly collectable as well as a first rate cigar to age. 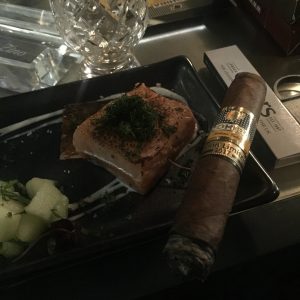 We followed this launch with a Talisman launch party at Turmeaus Late Hour Cigar Shop & Sampling Lounge in Liverpool last week and true to form tickets were sold out in minutes for an incredible evening of cigar and whisky sampling together with some splendid dishes from Chef Chris German. 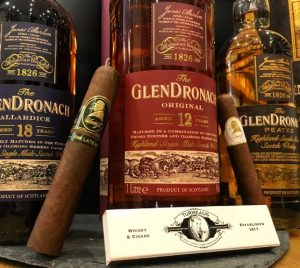 I’m just back from yet another sell out whisky and cigar tasting, this time it was at Turmeaus Norfolk! We had the pleasure of sampling an ultra luxury cigar pairing of Davidoff cigars and Glendronach whisky. The Davidoff Winston Churchill Petit Corona was the starter of choice; a peppery, woody little treat to excite the taste buds before moving on to the main course. To ease into the whisky (not that I need easing in!) we started with the Glendronach 12 year old. This whisky is super smooth, it almost has the texture of cream! The Spanish Pedro Ximenez and Oloroso sherry casks give this whisky a rich sweetness which is delightfully well balanced with the subtle spice. 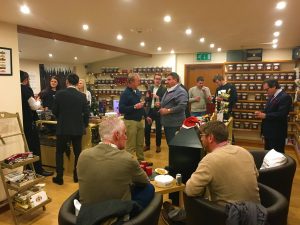 We moved on to the Davidoff Late Hour Robusto which could possibly be one of the best Davidoff cigars for an after dinner smoke. A magnificently refined and wonderfully complex smoke, wrapped in a stunning, dark and oily wrapper. Mirroring the cigar was the equally dark and complex Glendronach 18 year old; a sweet and spicy, lively malt which calms into a beautifully rich sherry delight. Overall the cigars and whisky worked perfectly with each other, and all of the guests remarked on how luxurious the pairing was.

Our Norfolk outpost seems to be busier by the week. It’s a super cigar and pipe shop with the largest range you’ll find for miles and miles around, and no cash required as its all at internet prices!

This week Karyn and I are jetting off to sunny Havana to celebrate the Partagas Festival with friends from all over the world. I’m looking forward to staying at the new Kempinski hotel and checking out the Cohiba Atmosphere shop there. The gala dinner is an outrageous event for ‘Amigos de Partagas’ ending with a brilliant charity auction of unique humidors of cigars. Full report when we get back 🙂 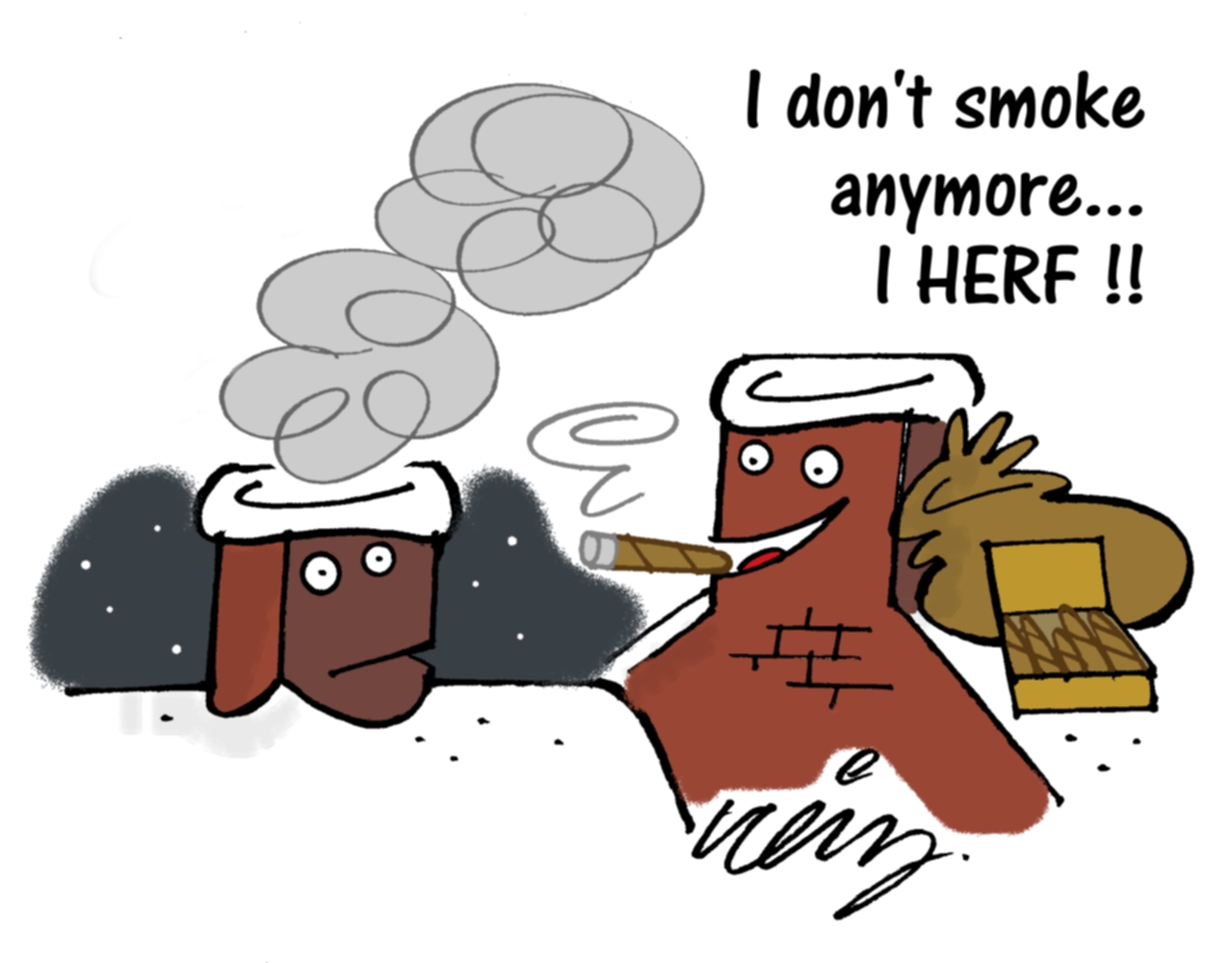