The first recorded mention of the distillery was in 1779, the first on Islay.

Bowmore Distillery is situated on the shores of Loch Indaal, right in the heart of the lovely town of Bowmore, which means great reef or Sea Rock. A few distinctive characters of Bowmore Single Malt Whiskies are smoke, salt and sea-weed, a great combination which will appeal to most fans of Islay drams! 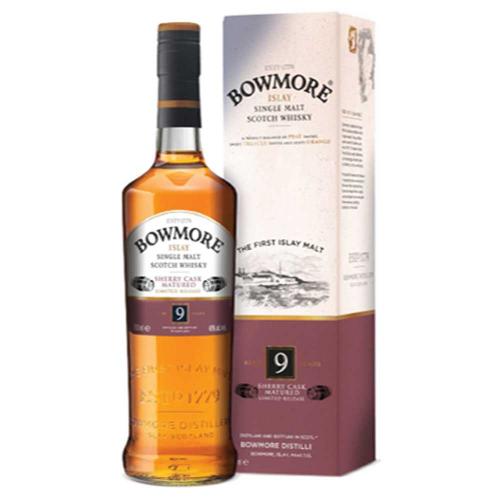 This Bowmore 9 Year Old is the latest addition to the Islay favourite’s core range. Matured in the finest Oloroso sherry casks, Bowmore 9 Years Old reflects the natural elements that surround the No. 1 Vaults and the generations of tradition within. The result is a rich whisky with notes of cocoa, dark fruits and crème caramel, along with Bowmore’s trademark smokiness. 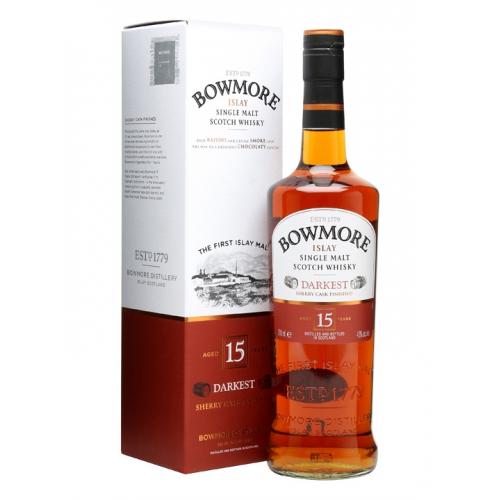 The next Bowmore Single Malt that really stands out for its perfect harmony of peat smoke and Sherry sweetness is the Bowmore 15 Years Darkest.

Matured in an inspired combination of both bourbon and sherry casks, this stunning 15 year old edition spent its final three years in Olorose sherry casks which is what gives this 15 year old ‘Darkest’ a beautiful Bowmore balance.

As a really special dram that combines character, balance and incredible complexity has to be the Bowmore 18 Years. Cosseted away in the finest, hand-selected oak casks and allowed to mature at its own sedate pace, this is one of the most remarkable, perfectly balanced malts of its kind. A rare exceptional bottle, the stocks of Bowmore 18 Years Old may be limited but there’s no end to its enjoyment.

Greetings from rather chilly London where I’m staying warm with a large dram of Orchant Selection Cigar Malt and a 2007 Bolivar Belicosos. 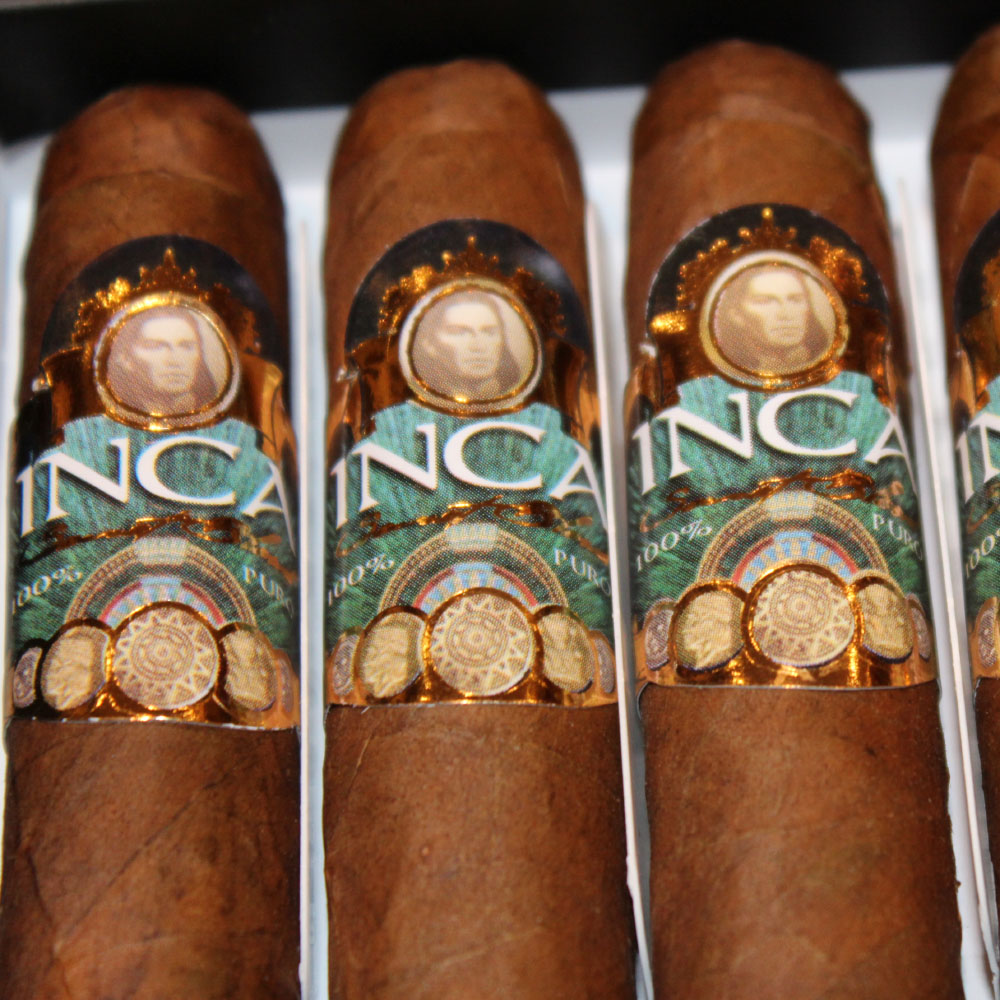 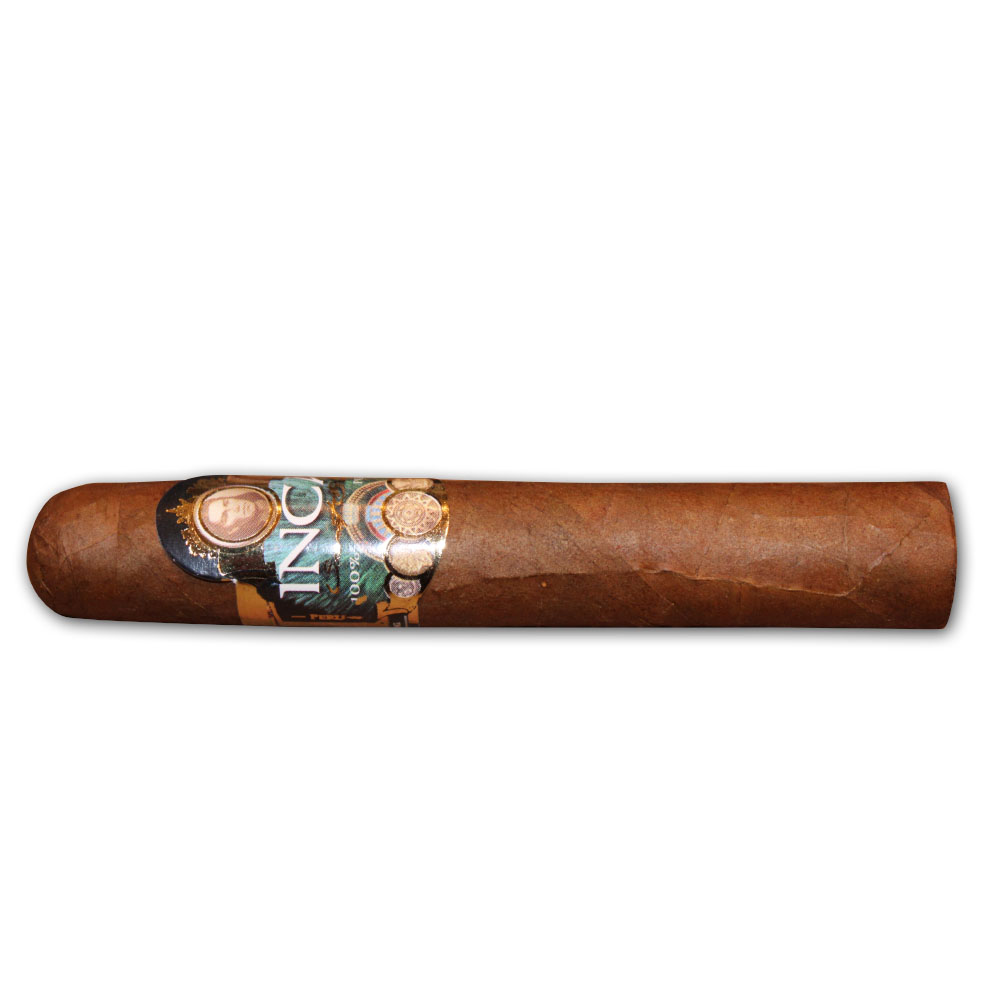 As there are only 5000 sticks available, I am limiting customer orders to a maximum of 5 sticks per order. Reserva D’Oro is an exceptionally difficult leaf to successfully grow as it is susceptible to blue mould disease, however, we have managed to harvest enough grade A leaf at Tabacalera del Oriente in Peru to blend a remarkably sweet full flavour complex premium cigar that I believe is one of the best ever new world cigars!

It’s taken us over 18 months since we started this project, so treat yourself whilst they are around… as they won’t be for long!

Our February 26th cigar auction catalogue is now all but closed with almost 300 Lots to be offered. It’s an online auction and very easy to get into the action- a bit like bidding on eBay. Think of us as cBay 🙂 We have a fine selection of mature, aged and rare cigars including some magnificent pre embargo cigars as well as limited editions, Davidoff, Dunhill Seleccion, Gran Reserva and limited edition humidors. The auction Lots will be online with photographs and descriptions as usual 10 days before the auction end date. Lots are available for inspection at my swanky new vintage cigar walk in humidor at our London offices 🙂

So we’re kicking off the new year in style with a new cigar from Peru and I understand that our beautiful La Casa del Habano in Chester is soon to receive some specialities including the new Hoyo Coleccion Habanos book and Partagas 170th anniversary humidor. Hopefully a few more new releases from Cuba over the next few months too.

If my market intelligence info is good (and I think it is), the shortages of Havana cigars are continuing in earnest with many European and other distributors out of stock on many, if not all, Cohiba cigars as well as many other Havana cigars. Fortunately, we work closely with our colleagues at Hunters & Frankau, the best Havana importer in the world and whilst we don’t have every single cigar available all the time, with their help and our huge cigar reserve (built over the last 20 years) we do have almost the full range of every Havana cigar most of the time. 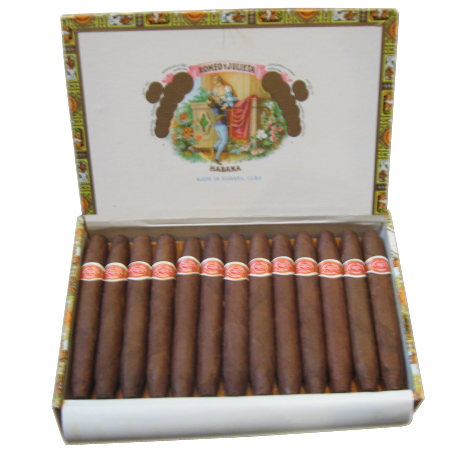 We have also released some of our interesting aged cigars including La Gloria Cubana Tainos from 2001, Romeo Celestiales Finos from 2001 and El Rey del Mundo Grandes de Espana from 2003 – all quite excellent smokes with the benefit of many years maturing. (The Romeo’s would make super special Valentine’s gift!) 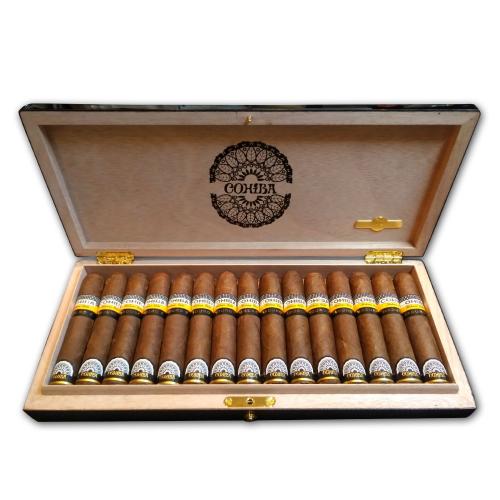 On the expansion front, I’m heading to Liverpool this week to check the progress on our second phase of Turmeaus Liverpool development on Old Hall street. The amazing design has been signed off with the architects and the builders are crashing away to create the most beautiful whisky bar, tapas lounge restaurant and late night Turmeaus cigar shop and sampling lounge. If all goes to plan we will open this new venture late March. It will also be one of the venues for our 200th Turmeaus anniversary celebrations this year.

My colleague James at C.Gars – Norfolk has been doing some super January Flash Sales which have been ridiculously successful! For advance notice on all of our offers you need to subscribe to our newsletter HERE.

Last Saturday we had our quarterly Management (Michelle, Sara, Roy, Karyn and I) meeting at The Crazy Bear in Beaconsfield – beautiful restaurant but the food and service didn’t live up to the hype sadly. The low point was the table not being ready for 40 minutes after the reservation time and to be told to enjoy a drink at the bar. No big deal I thought, only to stand at the bar for 15 minutes and then be told ‘we don’t serve drinks at the bar’. Rather pathetic. C’est la vie. Another vote with my feet I think will be in order. 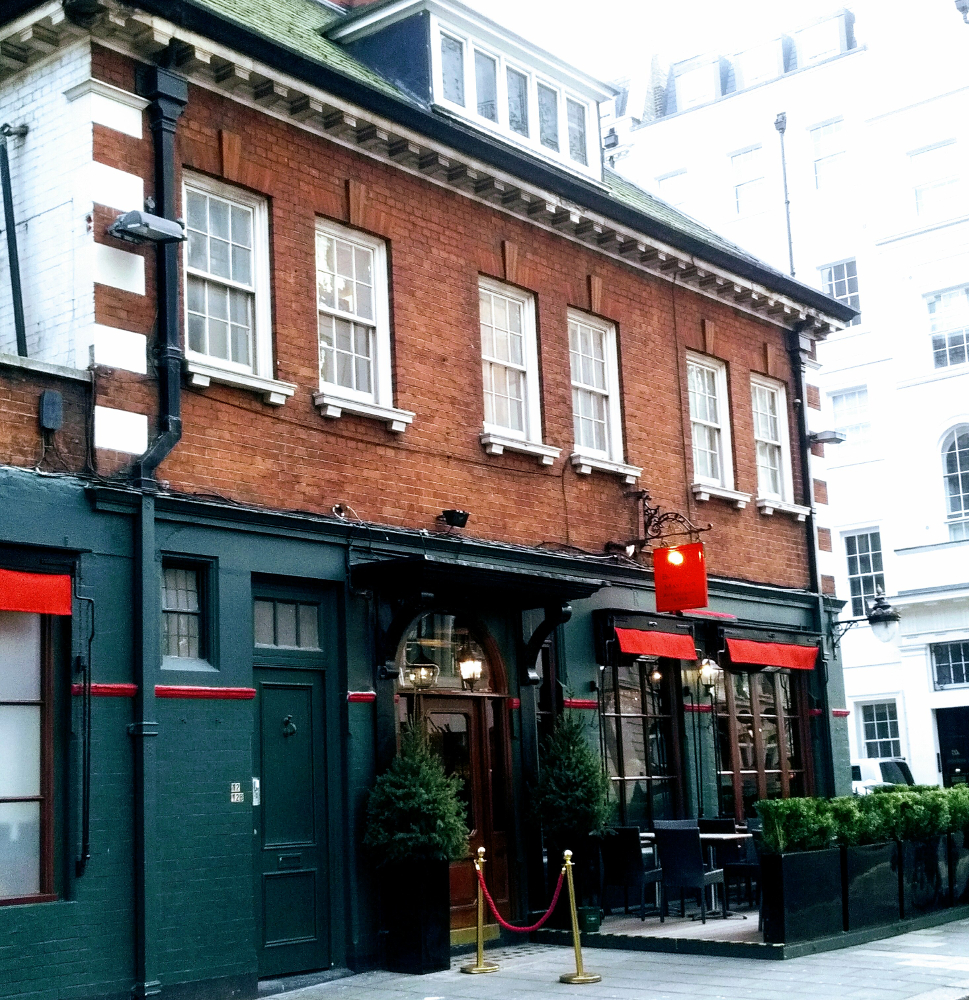 Michelle and I went to the new Boisdale restaurant in Mayfair last week and had a splendid business lunch. I love all of the Boisdale restaurants, great food, the best service and cigar friendly of course. What’s not to like? Mayfair is a great location for us so we will no doubt make that a regular stop on the way to Turmeaus Mayfair 🙂

I zoomed over to Holland on Thursday to meet with our friends at Scandinavian Tobacco Group and over a very long day/night we have agreed plans for some very new exciting cigars exclusive to the UK market for release this year.

My Co – Director Laura is now back from her hols and I’m on mine. Time to recharge the batteries after our most successful year yet and come back fighting fit and ready to make 2017 even more successful! So I’m taking a rather large baggie filled with all of my favourites to herf my way through till the middle of February.

I’ll leave you in the capable hands of Mitchell’s Angels 🙂 (Michelle, Laura and Sara!) but I’m always available on email… wherever I am in the world! 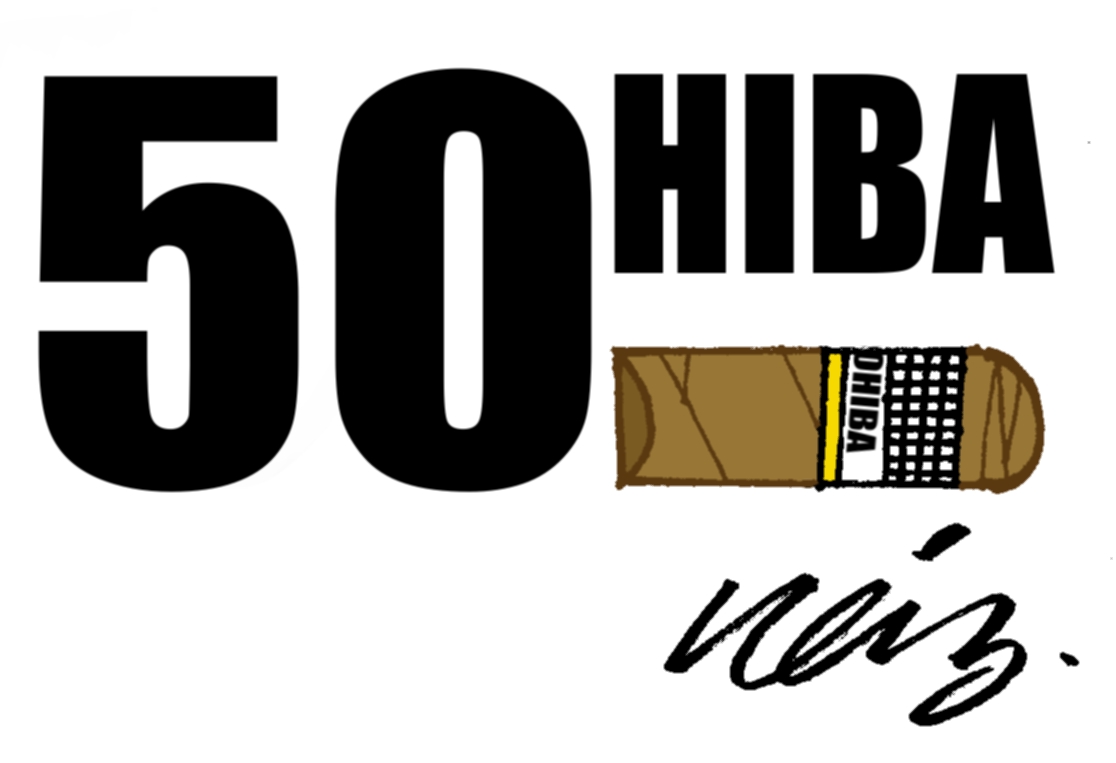 As a big fan of Speyside Single Malts the Balvenie Doublewood expressions are a must to try! The 12 Year Doublewood acquires its complex rich smooth taste from its maturation in 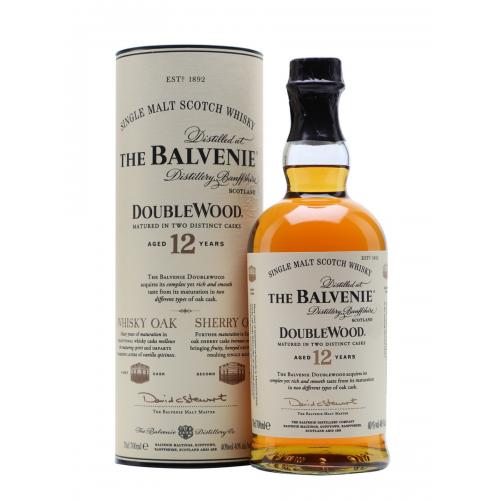 two different types of oak casks. One of the classic after-dinner malts, Balvenie Doublewood’s is a result of being aged in ex-bourbon casks before being finished in sherry casks.

Double Wood is an excellent example of what the Balvenie distillery can craft, even at 12 years.

Nose: Gristy with a subtle nuttiness to it and slightly grapey.

Palate: Sweet with a good body. The bourbon characters quickly develop and as they do, a gentle spice and the slightest hint of vanilla appear. A balancing peat.

For something richer and with more complexity I would definitely recommend the Balvenie 17 Year Doublewood also having maturation in two different types of oak casks! 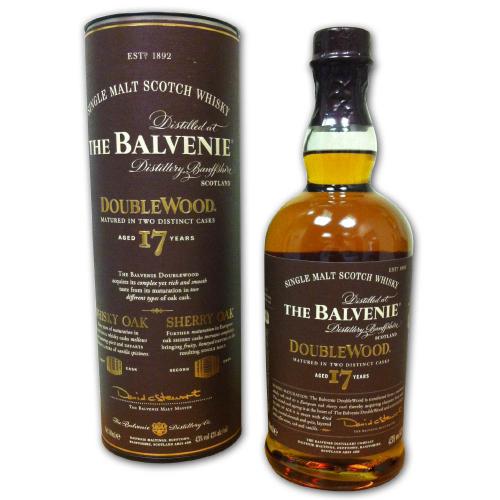 Hope these double delights have inspired you to enjoy and try also more great drams from this legendary distillery!

Happy New Year to all our customers and we hope you all enjoyed some fantastic tipples over the holiday season! One whisky that always stands out for being a firm favourite and all-rounder are the Highland Park Single Malts!

Highland Park 18 Years is a stunning expression to appeal to most palates.

Considered by many whisky writers across the globe as the ‘industry’s favourite whisky’, Highland Park 18 year old is a masterclass of balance, complexity and refinement.

A whisky, which reveals more layers with every glass you enjoy. 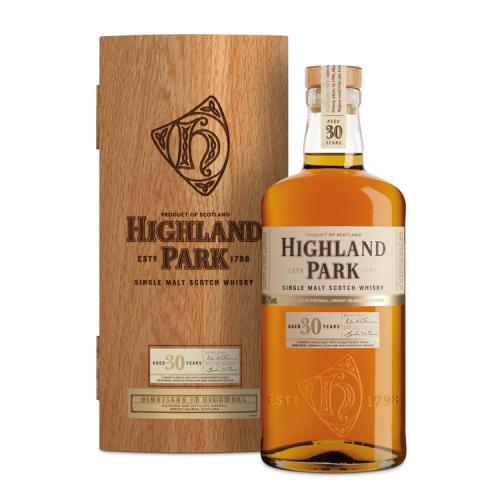 Now if you really want to push the boat out and indulge in sheer luxury I could not think of anything better than the Highland Park 30 Years! A real legend from Orkney rarely tasted apart from the privileged few! So here’s your opportunity before these older bottlings become even harder to find!

After spending 30 years maturing, this stunning single malt whisky has been bottled at a lower strength than previous editions, 45.7% ABV.

This Highland Park 30 Year Old is an outstanding whisky, with rich flavours which we have come to expect from older Highland Park bottlings.
Nose: Sweet and floral, with some fruits such as unripe peaches and mango, and lime zest. Sweet buttery pastry, marzipan, sticky cherries and a touch of plum jam also come to light.

Palate: Marzipan and sherry fruit firstly dominate, with sour spices and wood. There is also Cinnamon, maraschino cherries with a big woody spice.

Even though Christmas might have just ended it is still the fabulous holiday season and the right time to be relaxing and enjoying great drinks! We have two fantastic GORDON Castle Gin Halcyon Days Festive gift sets that not only look stunning but beautifully crafted with exquisite botanicals. 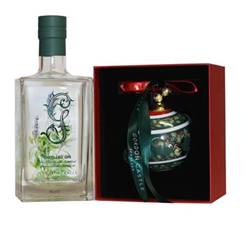 Coated in the shade of evergreen and decorated with a deer inspired by the statue in the garden at Gordon Castle. Woodland themed, a bauble that complements the Christmas tree beautifully.

Premium gin by the fire and a gorgeous bauble on the tree; what could possibly be better?
Crisp, elegant and refreshing with a lovely and clean palate with subtle notes of lavender linger at the back of the nose and within the mouth.

Garden mint soon comes into focus on the nose and in the mouth helping to promote the clean refreshing character. Adding to the richness and complexity of the gin is warming herb notes. Ideally served as a classic martini with a sprig of mint or with tonic with lemon,lime and mint garnish. 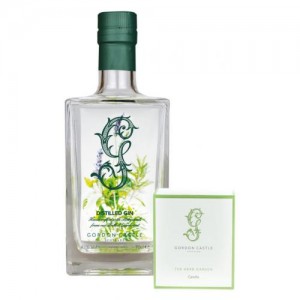 Highland herbs from the walled garden at Gordon Castle are carefully blended and patiently distilled to tease out the botanicals from the castle’s restored Walled Garden to make this stunning Gordon Castle Gin whilst the candle combines rosemary and thyme essential oils from the very same garden.Crisp, elegant and refreshing with a lovely and clean palate with subtle notes of lavender linger at the back of the nose and within the mouth.

Garden mint soon comes into focus on the nose and in the mouth helping to promote the clean refreshing character. Adding to the richness and complexity of the gin is warming herb notes.

Ideally served as a classic martini with a sprig of mint or with tonic with lemon,lime and mint garnish.

We would like to wish all our customers a very Happy New Year!