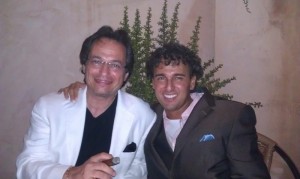 I’d like to say I have had a good rest and some recuperation after the trade show in Orlando but it hasn’t quite worked out like that as I seem to be busier than ever in Los Angeles!

So many of my American smoking chums tell me that it’s not cigar friendly over here but I have no idea why as I have been herfing day and night at the hotel I am staying at in West Hollywood which is super cigar friendly and  there are no shortage of places to go for a cigar.

I did the tourist thing and went to Laguna Beach for the day and stumble on this small cigar shop very friendly and a good place for an impromptu herf.

The Four Seasons Hotel has a terrific cigar terrace well worth a visit.

The 1200 bar at the Sunset is a great spot for a late night smoke and ‘one for the road.’ 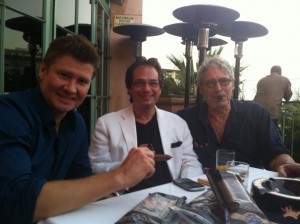 We had a bit of a mega herf at Grand Havana Room in Beverly Hills with around 25 cigars smoking chums taking over the terrace for a rather late night of dinner, drinks and smokes. Actor Michael Nouri and musician Michael Lington joined us for a memorable evening. I remember Michael Nouri when he was Lucky Luciano in Gangster Chronicles back in the early 1980’s!!!! Very cool actor… And he loves a good cigar!

My award for first rate service and delicious food so far on this trip goes to Locanda Veneta highly recommended.

Plan B has a good cigar terrace very comfortable and great food too. Hint – If you are ordering Scotch its better value by far to start off ordering doubles! (lesson learned!)

I’ve been smoking my way through an extraordinary amount of Fuente cigars during the day, particularly Kings and Opus X for something a tad heavier. For some great Nic kick I have been blasting through boxes of Regius robustos and a few of my Secret Blend Inka cigars in between! 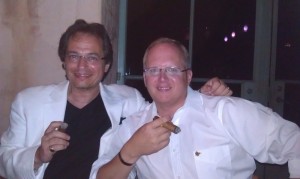 Not much news from my London office, The Boss (Michelle!) tells me everything is under control and I should be having a few days vacation which sounds good to me. We are now planning to open our 10th cigar store in October if all goes to plan which is very exciting… More details in the coming weeks.

Hunters and Frankau are hoping to release the new Cohiba Piramides Extra in the next few weeks or so. I’m very excited about this cigar, the examples we smoked in Havana at the February Festival were first class. Careful where you buy from though – I have already seen counterfeits floating around!!!!