As the subject suggests we are eagerly awaiting the release of the long awaited Upmann No. 2 Reserva. We still don’t know when but the market intel suggests it should be fairly soon.

Reserva and Gran Reserva series are my favourite cigars as they are generally the best! and the No. 2 will be no exception. I smoked them at the Festival in Havana last year and they were sublime smokes. Presented in cabinets of 20 cigars we expect massive interest in this splendid cigar.

In herfing news from last week…

This was a full on herfing week starting in style on Monday with an office herf with friends and thoroughly good sampling of the Partagas Maduro No. 1 followed by dinner at the White House and a herf at Chez Orchant featuring H. Upmann Magnum 56 paired up with copious quantities of Robert Graham Dancing Stag single malts. 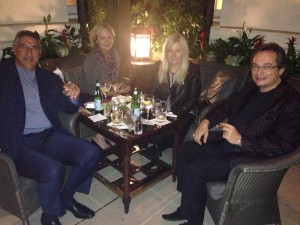 Wednesday herf was with friends in The Garden Room at The Lanesborough where we were back to old standards including the Orchant Seleccion 2010 Bolivar Belicosos and Partagas P.2’s paired up with Oban single malt and chocolate muffins (TY JtB!)

That got me in good herfing shape for the whisky and cigar tasting evening at La Casa del Habano Chester on Thursday which was a ridiculously sold out, two session event which ran from 6 pm until midnight! we sampled Partagas D.6’s and D5’s and followed them with El Rey del Mundo Tainos 2001 vintage (closest blend to a Dom Perignon that I can think of) the whisky line up was the Turmeaus Reserva Cask, Turmeaus Highland (coming to a bottle near you soon!) and The Hoebeg by Robert Graham. 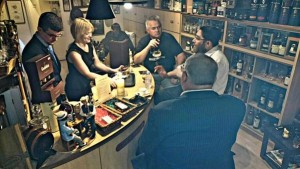 The Wednesday Whisky Club members were out in force and enjoyed a very special club offer on Romeo Anejados, Our friend and International member Pal from Norway came over just to enjoy the evening and friends traveled from far and wide to make this another very special event.

I popped in to Turmeaus Liverpool on my way to Turmeaus Chester and am always surprised to see how busy these shops are. The range of cigars and whisky is quite breath-taking.

The builders are crashing away at the Chester Turmeaus additional premises and we now have a beautiful floor as well as all three shop fronts redecorated. The beautiful new cabinets and furniture are being handmade now and will be installed in the next few weeks ready to take delivery of some extraordinary whisky, rum, gin, champagne and of course more cigar ranges 🙂 Our seating capacity for cigar sampling will be increased and we will have an additional ‘whisky sampling by the dram’ bar.

Saturday late night and it was back to The Lanesborough with friends until… Very late 🙂 we went through a baggie of some excellent 1996 vintage Havanas including Cohiba Siglo V (unbelievable good smoke) Partagas 898 and Cohiba Corona Especiales. I love the Garden room, super comfortable and the best in service.

Next week, I’m off to the trade show at Dortmund and as ever will be reviewing the latest cigar and accessories to bring our clients the best products at the best prices.

I’ll be offline Monday and Tuesday and for those celebrating, I’ll take the opportunity to wish you a very happy and healthy new year. Oh! I better not forget to wish a very happy birthday to C.Gars Director and my better half – Karyn 🙂