Do we look silly? you bet we do! But its all for a good cause …Comic Relief 🙂 Yes it’s that time of year again!

So if you wish to top up your humidor or buy some accessories between now and Friday midnight, we’ll be donating 10% to Comic Relief.

So on with the red noses and in with your orders and Monday it’s out with a charity cheque from C.Gars Ltd to Comic Relief !

Oh and my sales team have challenged me to not smoke all day Friday but just have a red nose on my cigar all day. If I can do it C.Gars Ltd will be donating an extra £150 to Comic Relief and if I can’t……. it comes out of my personal account!

Thanks in advance for your support of this worthy cause and Happy Red Nose Day from all at the sales team of C.Gars Ltd. 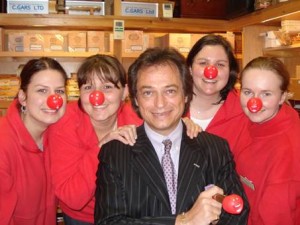 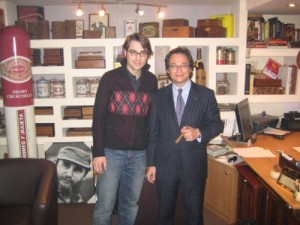 I’m finally recovering slowly from the laryngitis that knocked me out this week and arrived at a rather full London office this morning as Jose, Brian and Paul from OLIVA cigars popped in for a cigar (or two) and a chat. 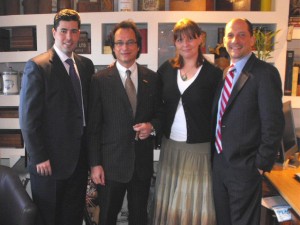 Brian kindly gave me a “Series V” to smoke and I must admit it really was very good indeed.

We only sell a limited range of Oliva at this time http://www.cgarsltd.co.uk/nicaraguan-cigars-oliva-cigars-serie-c-317_102_380_275.html but I think we may be offering a far wider range in the near future as these cigars are very high quality long filler hand made cigars that certainly have a place in our range and I think a lot of our clients will absolutely love them. 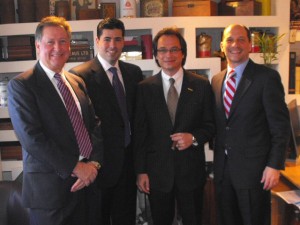 Checkout my Habanos Festival page which at last has ALL the photos on it including shots of the hotly expected Cohiba Gran Reserva. Sorry still unsure when these will be released although I did see them being rolled at El Laguito last week. http://www.cgarsltd.co.uk/document.php?id=festivaldelhabanos2009.htm
Our London offices have gone through yet another facelift and refurbishment and we look forward to welcoming friends for a sampling session soon 🙂

Just returned from Havana after a rather long flight on Virgin Atlantic. £4300 for Upper Class… excellent value for some of my friends but I was slumming it in Premium 🙂

I had a wonderful time at the Festival and it was great to meet up with so many old friends as well as make many new friends although I was a lot quieter than usual having lost my voice for the last few days…. very frustrating for me but may have been pleasant for others!

Despite my lack of voice I still enjoyed the gala dinner immensely and it was great to see Ajay Patel on our table. Ajay operates the La Casa del Habano in Erdington (close to London) and is a most competent Havana cigar specialist having been in the business for many years. Some speciality lines can only be bought in the UK through Ajays LCDH so he is well worth a phone call or email. 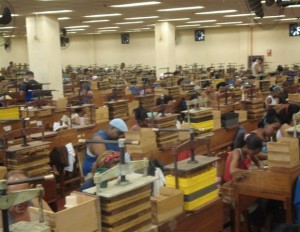 Saturday evening whilst watching CNN news at the Hotel Nacional I was pleasantly surprised to see myself on the clip about the Cigar Festival! First time I have been on TV is some years! I’ll try and get the clip for the website.

Laura is putting up a Festival web page with some great photos taken by famous Cuban photographer Eric Rigori. Our thanks to Eric for his kind assistance as ever when I am in Havana
http://www.cgarsltd.co.uk/document.php?id=festivaldelhabanos2009.htm

We are also putting up a web page listing all the Havana cigar brands and their owners as well as the cities they were located in. I believe there were over 4000 which was far more than we had originally thought. This list has been researched thoroughly by Rolando Salup in Cuba and we thank him for his kind permission to use the information on our site. We are just waiting for translation of his notes and will then add them to the site in English.
http://www.cgarsltd.co.uk/document.php?id=aged_cigars.htm&title=Aged+Cigars

Michelle will be adding some excellent Cuban antique cigar cabinets to the online store in the next few days, that’s as soon as she has the time as our offices are once again having some more works done to them…. so I think I’ll stay home this week!

I tried the Trinidad Robusto “T” and confirm “there’s a lot going on” with that blend. A first rate Havana cigar that will be a massive success with our clients. The cigar can not just be called a “robusto” as it has a pigtail head and therefore has a new vitola name “robusto T” If you think about a Trinidad Coloniales with the same flavour burst but a cooler draw you will be getting the right idea. Thanks to Simon Chase of Hunters and Frankau for this delicious cigar.

I tried the Cohiba Siglo VI Reserva and confirm it’s an incredible 5 year aged cigar that will undoubtedly become a collectors item. I can’t wait for these to be released.

Finally, I tried the Cohiba Sublimes extra from the book and again confirm this is a 9/10 ( I never rate higher) cigar that I would gladly smoke for the rest of my smoking days. If you would like to buy some I have around 17 singles left now ! just shoot me an email sales@cgarsltd.co.uk

Looking forward to getting back to Havana in November for the Amigos de Partagas Festival !