It’s been an interesting weekend as I decided to do a blind taste test between Friday and Sunday on the same 3 cigars and rate them.

The cigars were a Monte 2.Upmann 2 and Diplomaticos no.2 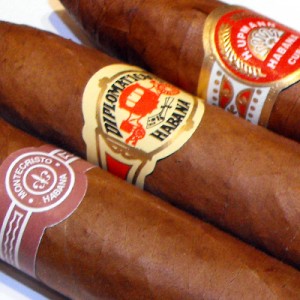 Michelle numbered 3 piramides 1,2 and 3 but I (obviously ) didn’t know which cigar was which. 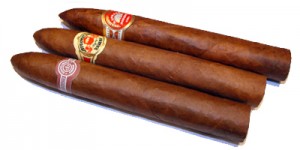 Now,there was nothing wrong with the Upmann 2,in fact 2007’s are the best vintage I have found in this cigar but it was a bit”tart” in comparison to the other two and I generally enjoy a smoother smoke.The Monte 2 was a great smoke as well but lacked the depth/.complexity of the Dip 2.

So there you have it,after a lifetime of having the Monte 2 as my favourite piramides I can honestly say the Dip 2 for my palette at least was a better smoke.

Lasts weeks travels took me to on a tour around my whiskey and cigars shops in Scotland http://www.whisky-cigars.co.uk/ where I enjoyed smoking the new La Gloria Cubana Gloriosos with my partner Ron whilst enjoying a dram or two of our exclusive Robert Graham single malt range.

Our shops also received allocation of the limited edition H Upmann Magnum 46 jar ( 30 cigars) which can only be described as exquisite. Grab one while you can as there are only a tiny amount available.

I also visited my cigar stores in Liverpool and Chester which were busier than ever.In fact Turmeaus in Liverpool should go in for a competition “how many customers can you cram in a tiny cigar shop”! it was positively buzzing!

I only manage to get around to all our cigar stores every few months these days but love to rummage through the humidors to see what goodies I can find. I even managed to snag a few Ramon Belicosos on this trip…DEE LICIOUS !