Greetings from cool Havana…. sadly that’s cool in temperature in Havana as it’s been rather wet, windy and not so warm since I arrived on Wednesday evening.

Around 1000 cigar aficionados, distributors and cigar merchants are attending the 2010 Festival del Habanos this week and there’s a fabulous atmosphere as well as a lot of anticipation and excitement for the release of the Cohiba Behikes that is due to be launched at the gala dinner tomorrow evening.

Whilst the BHK line will be a regular line, it will have a limited annual production so basically, when they are gone – that’s it for the year. I think that makes them a candidate for laying down, maturing and collecting and many of my clients are already making 10 year plans for laying down a quantity of BHK’s annually.

The BHK’s have a different blend to the 40th anniversary Behikes (aged 5 years) as well as an extra Medio tempo filler leaf which will give the cigar a very distinct flavour characteristic as this is a dark leaf from the top of the plant.

I joined the Hunters and Frankau group today visiting the La Corona factory and the El Laguito factory where we saw the Behikes or “BHK’s” being rolled. H&F have an enthusiastic crowd of UK cigar merchants which may be one of the reasons why the UK market for Havana sales was one of the most successful in the world in 2009

We enjoyed coffee and Cohiba robustos with factory Director Arnaldo at the Cohiba factory and Eduardo kindly took us on a tour around the factory. I even bumped into Norma, the lady responsible for rolling all the Cohiba 40th anniversary Behikes.

The trade fair at the Convention Centre was exceptionally busy today and I was delighted to find some excellent 1919 cigar magazines as well as 1970’s brand catalogues. Also found a 1956-1958 cigar reference book and some splendid 1950’s cigar cabinets.

I attended the aged cigar blind testing. The cigar was a Romeo Exhibition No.3 and it was easy to guess which numbered cigar was the aged example and which was the recent production example. The panel included Simon Chase of H & F and Colin Ganley of European Cigar Cult Journal.

After a busy morning I herfed at the Melia Habana LCDH, smoking a custom blend “Maravillas” rolled by Yolanda and had a few shots of Vigia 18…. a perfect combo

Staying at the Hotel Nacional as usual as it’s the best meeting place in Havana for the cigar crowd. Looking forward to the Gala dinner tomorrow! 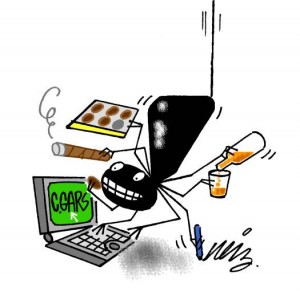