I’m starting to get very excited for the Auction weekend with auction herfs organized at Ten Manchester street on Sunday 25th and Boisdale Canary Wharf on Monday 26th November.

Expecting a good crowd of friends from overseas to attend and looking forward to being spoiled with some delicious food at Ten Manchester Street and Boisdale. The drinks and smokes won’t be too shabby either. A few tickets still available for both evenings though you may have to hurry. 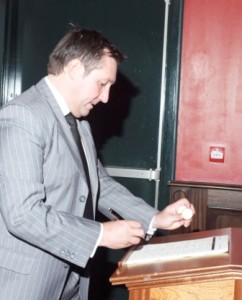 Director of Auctions, Brian Ebbesen has now done his final checks on all cigars and rejected a box of Montecristo A as he was not satisfied with quality (Lot 28) which has now been replaced with a 1994 English Market Selection box of 25 Montecristo A instead.

Viewings available at our London offices Monday to Friday next week by appointment as well as Sunday 25th from noon as a pre-pre-auction herf(!) – where we will be serving Boisdale Champagne, snacks and sampling Ramon Allones Petit Belicosos UK Regional Edition cigars.

You can browse the magnificent selection of 300 Lots online or on the PDF.

Whether its Aged, Rare, Limited Edition, Mature, Davidoff or Dunhill that interest you, there is potentially something for everyone and no doubt some bargains will be had on the night.

If you need any advice or condition reports simply drop us an email at sales@cgarsltd.co.uk

This week I did a road trip to our Turmeaus cigar shops in Liverpool and Chester – 7 hour round trip in a day with a baggie of UK Regional Editions! Started with an El Rey del Mundo Choix De L’Epoque, moved on to Bolivar Britanicas and finished off with Punch Serie D’Oro No. 1. My kinda road trip. 🙂 Sampling sessions at both shops of course as well as a fudge sampling session at Turmeaus retro confectionery store in Liverpool – Yummm!

Also dropped in on the London Robert Graham whisky and cigar shop in West Hampstead for a dram of Hoebeg whilst admiring the HUGE selection of Havanas and other premium cigars in the walk in humidor. Kid in a candy store you could say… And you would be right. 🙂

Cambridge Robert Graham opening date now set for Tuesday 4th December and I’ll withdraw my raspberry of the week award from last week for British Telecom as they finally came through and brought forward the phone line installation date. However this week’s raspberry of the week award goes to the PPI claims company that has already phoned me 5 times and of course received my usual colourful language reply which I probably shouldn’t repeat verbatim on my blog!

Enjoyed dinner and spent an evening smoking some old Dunhill Don Candido with the Editor of Smokes Magazine at the lovely Ten Manchester Street. I always liked the menu but now it’s better than ever having been completely overhauled with an Italian influence. If you haven’t herfed there… you really should.

Next week I’m off to Scotland to sample some of our old and some of our latest Robert Graham single malt whiskies.

We have three delightful whisky and cigar shops in Scotland (2 in Edinburgh and 1 in Glasgow) and its always great to catch up with the Team at Robert Graham. Someone emailed me the other day asking if he could speak to Robert to compliment him personally on the award winning Ailein Mor. Very nice but had to explain that Robert had been dead 100 years! Ron and I of course took the business over from the Graham family when the business was on its last legs some 8 years ago in one rather run down Glasgow shop (which subsequently burnt down in a massive fire!) and have since recreated the brand successfully online and in 5 retails stores as well as introduced our award winning range of

Office herf today with my friend Gennaro Lettieri, the owner of Tabacalera del Oriente who make our Inka Secret Blend cigars. The brand I created is one of the biggest success stories of our year at C.Gars Ltd as the cigars are hugely popular now both in store and on our websites. Shouldn’t be too much of a surprise I guess – very low prices for very high quality handmade cigars in popular sizes. If you haven’t tried Secret Blend, you should as you will be very pleasantly surprised! Next year a new range of Inka Secret Blend will be introduced to the US market through distributors with a new range of sizes for the American cigar smoker. All exciting stuff! 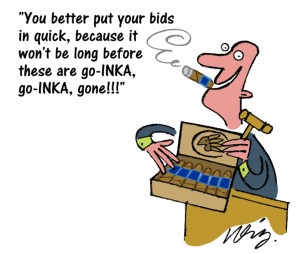